As most of you know (and I re-posted a couple of days ago) John Forbes Nash ceased to be. A tragic traffic accident means that he died at 86 and not of old age.

Nash was awarded a Nobel prize in economics in 1994 and was just returning from a trip to Oslo to receive the Abel prize for his work on non-linear partial differential equations. Those qualities would be enough to make him one of the most famous mathematicians in the world but most of us remember him from the movie A beautiful mind.

Despite of all these accolades and his work on PDEs, mathematically Nash will be remembered for the Nash equilibrium. This is a key concept in Game Theory as it allows us to figure out a set of strategies such that the players involved in the game will not have any incentive to change them. This can lead to some paradoxical outcomes like in prisoners dilemma where the Nash equilibrium is the one in which both players cheat each other resulting in a suboptimal outcome for both of them.

For people following this blog the interesting part about Nash equilibrium is that the equivalent in Evolutionary GT, the Evolutionary Stable Strategy, can be used to understand if a given mutation could spread in a population in equilibrium. The canonical example is the Hawk-Dove game, which does not look anything like this: 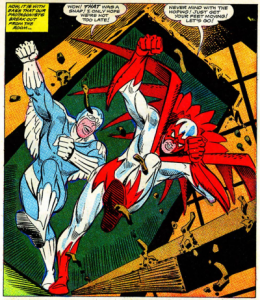 With this game you assume a population in some sort of equilibrium and study whether in that population a mutation conferring aggressiveness (hawks) or meekness (doves) could emerge and spread. Assuming that dovish individuals do not pursue their goals aggressively but also are not likely to get into dangerous fights then the ESS will show that any given population will have not one type or the other but a mixture of both types of behaviours.

Cancers are very dynamic but, although not in every case, they can take decades to grow and acquire mutations that expand in a clonal fashion. If we know the key driver phenotypes (and we can make educated guesses about that), we can see what potential phenotype will emerge next and how will it drive tumour heterogeneity (which can be correlated to resistance to treatment). Also we can design novel treatments that will impact the rules of the game instead of trying to kill tumour cells indiscriminately.

So thanks Dr. Nash and rest in equilibrium.